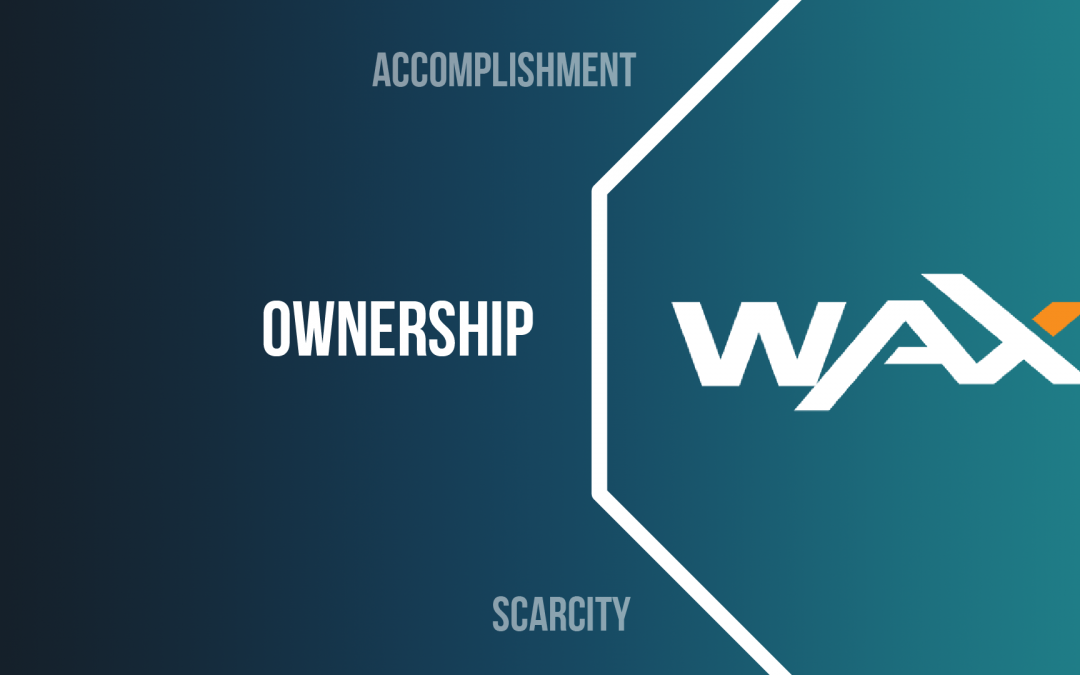 Just a little reminder –  Left Brain Core Drives in the Gamification framework being more associated with logic, calculations, and ownership.

In this article we will discuss probably the most used core drive in blockchain applications – Ownership & Possession.

It must be said that although this core drive of gamification is used roughly and everywhere in WAX.io dApps, such attempts at gamification are very chaotic and not systemic. Therefore it can give much greater results if used correctly.

Now we will try to sort everything out and form a vision of how you can systematically gamify your application using the Ownership & Possession core drive.

Ownership & Possession core drive – is the drive where users are motivated because they feel like they own something. When a player feels ownership, he innately wants to make what he owns better and own even more. Besides being the major core drive for wanting to accumulate wealth, this deals with many virtual goods or crypto currencies. Also, if a person spends a lot of time to customize her profile or his avatar, he automatically feels more ownership towards it too. Finally, this is also the core drive that makes collecting NFT cards and virtual items fun.

This Core Drive exhibits the strongest influence on analytical thinking. As we can see, the most enthusiastic collectors and digital ownership enthusiasts are more logical, calculating thought and the desire for possession as the primary motivating factors. When you do “rational calculations”, oftentimes you are evaluating the gain and loss of certain desirables, such as money, instead of considering your “feelings” from other Core Drives.

In almost all successful WAX.io NFT based projects initially there was one major difference. They gave information for users to calculate further potential of purchasing this or that collection of NFTs. In other words, they basically used Ownership Gamification core drive.

Our brains have a natural association with things that we own. Once you have a sense of ownership over something, it starts to take a different course in your value system and begins to motivate your behaviors differently. And the NTF standard gives the highest level of tangibility of ownership of digital items.

Therefore, the owner of the NFT is ready to invest more time, effort and even money in increasing the value of his asset. Why not give him such an opportunity?

So far WAX.io projects, for the most part, provide an opportunity to own items and fill their collections. There are many additional opportunities in this niche to give users the opportunity to use, develop and add value to the items they own.

A great example that makes full use of the sense of ownership is the SANDBOX on Ethereum blockchain project. The user can create his own NTF item, modify and improve it, thus increasing its value. Also, the user is offered the acquisition of land in permanent possession with the ability to develop it. Of course the user will constantly strive to increase the value of your assets by developing your land and property’s infrastructure.

The first shoots of such opportunities appear on the WAX.io blockchain, and this is likely the future of NFT items. The user will appreciate and become attached to his possession much more if he has where to apply and show it.

It will also be useful to discuss how you can support users in their ownership of the items in your dApp.

On one end, there are Status Points, where users see in a score keeping sense how well they are doing. Status Points for the most part can only go up as the user hits more Win-States or reach dApp levels and it cannot be traded for other valuables. This appeals more to Core Drive #2: Development & Accomplishment.

On the other end, there are Utilization Points, where users can utilize the points in a strategic and scarce manner to obtain other valuables. This technique is widely used by dApps in the way of additional tokens for holding and using dApp items.

Status Points can be issued by dApps for filling their collection, simple actions with NTF items.  Utilization Points (Tokens) can be issued for target actions in your application. As a rule, this token has its own value and can be used both within the application and outside it, for example, for sale on an exchange.

Let’s take a look at the basic techniques that affect Ownership & Possession Core drive. We have already partially described some of them above and propose to go deeper.

When you create a product or service, it’s often good to get your users to increase their invested ownership and possession in the process. This is why it is often advantageous to have them involved in the development process early on – to “build from scratch.”

As mentioned earlier, the SANDBOX project takes full advantage of this technique, allowing its users to create what they want on their own, instead of giving them the entire setup.

One of the most powerful and effective ways to utilize the Ownership and Possession Core Drive is through Collection Sets. Say you give people a few items, characters, or badges, and you tell them that this is part of a collection set that follows a theme. This creates a desire in people to collect all the elements and complete their selection set.

And this is the most popular technique of Ownership on WAX.io we should say. Most of WAX.io NFT projects have their own collection and push users to collect them all.

Protector Quest is a concept based on the occurrence that people start to develop a relationship with something that they are protecting. Here a bit of Core Drive 5: Social Influence & Relatedness is present too.

This one is good for NFT games. You can raise commitment to the game making users feel classic FOMO – fear of missing out their items. Once you protect something you own, you begin to feel an attachment and a connection to your assets since your brain needs to justify your actions as meaningful. Why would you spend time defending something that isn’t good?

There are a few additional techniques you can use within Ownership core drive. We will describe it in a scratch

If a person spends a lot of time customizing his profile or his avatar, he automatically feels more ownership towards it too. It is a simple but a really important technique.  Give your users a feeling of their own personalized profile and add some techniques from Development & Accomplishment core drive like Progress Bar.

The Alfred Effect is when users feel that a product or service is so personalized to their own needs that they cannot imagine using another service.

In the further development of your dApp you can collect a lot of data about users behavior on all stages and steps and make your application more fit for your visitors.  It will trigger user’s feelings of possession and raise your retention rate.

On the one hand, Ownership is the most common core drive in WAX.io dApps, it is the basis of all applications using the NFT standard.

On the other hand, it is now used on a superficial level and can be used much more strongly, which will give a competitive advantage over other dApps. By using the techniques above, you will be able to evoke the deepest sense of ownership in the user and leave it with you for a long time.