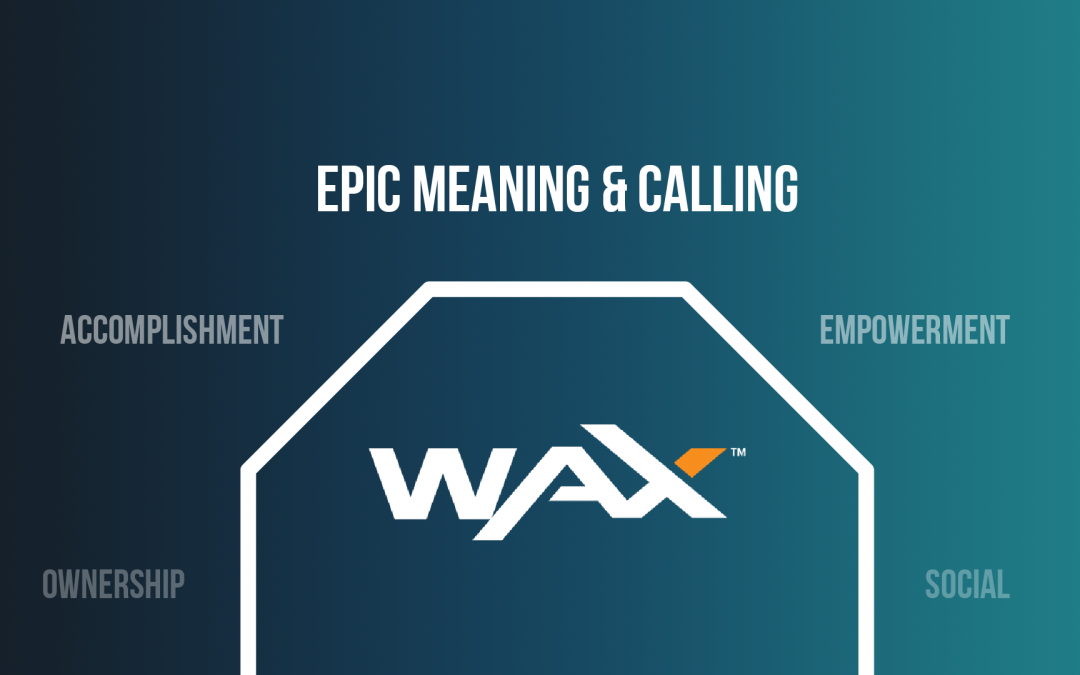 Some time ago, we published an article on how you can improve the engagement of your WAX dApp by using complex gamification.

Here we have described a total of 8 core drives within the so-called Octalysis Gamification Framework.

Most of the WAX projects are focused on owning and collecting at the moment, most of which involve Left Brain Core Drives.

Therefore, we now propose to fully delve into them and understand.  This will help you understand how the existing WAX projects work, see new opportunities and use these tools for your dApp right now.

In this article we will analyze in more detail Epic Meaning & Calling core drive.

Epic Meaning and Calling is the need or the urge to be a part of something much bigger than just yourself. When this drive is activated, participants choose to be members of your system and will take action not because it necessarily benefits them directly, but because it turns them into the heroes of the company’s story

Here are five Game Techniques to incorporate Epic Meaning and Calling into dApps in ways that will build engagement, motivation, and loyalty.

Almost all WAX projects start with a narrative that gives the user some context about WHY she should pay attention. Many of them are related to changing the niche, business field or even the world!

So why don’t we use narrative to give people content in other things?

Most successful WAX.io projects have a great story. Garbage Pail Kids were a successful series of sticker trading cards 35 years ago. William Shanter is a space hero! Even KOGs revived those distant memories of POGS – milk caps game.

What’s the story behind your dApp?

If you can incorporate a world mission into your offerings, you can gain even more buy-in during the on-boarding process. The way this works is to tie the actions you want people to take to something that will make the world a better place even if it is the world of gamers or collectors.

What can you offer for WAX users to make them feel like a Humanity Hero?

Allowing your users or customers to form a prideful group based on ethnicity, beliefs, or common interests makes them feel like they are part of a larger cause. This is one of the best techniques to gain an “army of supporters”, especially in the early stages of your project.

Elitism instills group pride, which means each member tries to secure the pride of the group by taking specific actions. It helps to spread the word and attract more and more project followers.

The nice example of Elitism can be shown in Dark Country – american gothic CCG game on WAX.io. It has a Sheriff’s Office – the place for chosen supporters, where all news and updates are shown first. For now only the Sheriff’s Office members have a unique possibility to play the first version of the game.

Does your project have a possibility to make your users feel elite?

This is the “Calling” in Epic Meaning & Calling. Calling makes people think they are uniquely destined to do something. And one of the Game Techniques that can introduce the sense of Calling is Beginner’s Luck.

A perfect technique to engage and retain users of your gaming dApp. If a user, upon the first day of using your dApp, randomly earns one of the really rare NFT items in the game that even veteran players couldn’t get easily, chances are he isn’t going to quit on day one. He’ll likely be using that powerful item day-by-day until the next hook in the game shows up.

Along the lines of the “Calling” theme, giving freebies that usually cost money for others to certain people in a way that ties to a larger theme can make customers feel special and encourage them to take further action.

It’s not about random giveaways that make almost any WAX project on Twitter, but about freebies for contributing or belonging to something. Like giving users some free coins or items for registration or simple actions is your game or any other project.

How do you make your new dApp user feel unique with Beginner’s Luck and Free Lunch techniques?

Next time we will discuss an Accomplishment Core Drive. The drive that unites all techniques that are associated with the word Challenge and Progress.